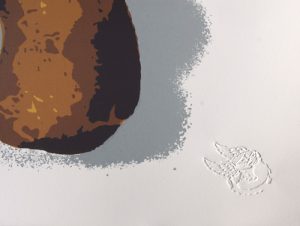 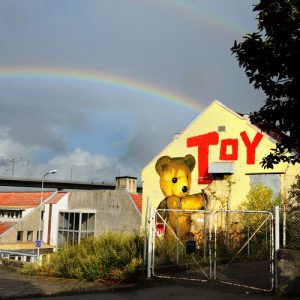 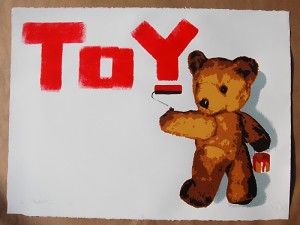 TOY was originally created in 2009 for Nuarts ‘Landmark’ series, a number of monumental pieces painted around Stavanger on the West coast of Norway which still ride today.

The double meaning appealing to kids, their grandmothers and the more cynical writer. (Toy used as an adjective to describe poor work or used as a noun for an unskilled writer. Tag over you).

I’ve had a lot of requests for this image and thought it was time to drop a print of it. In the same vein as ‘The Dreams of Louis V’ this will be a hand finished edition with the TOY roller work done with red acrylic with a tiny mini roller.

It’s a slightly smaller edition than advertised 41 instead of 50, but i’ve kept the same price.

It is signed, numbered and Blind Stamped by The Dotmasters and accompanied with a C.O.A.

The edition Size is 41

All prints come double tubed orders with in the UK are sent Next Day Special Delivery. The rest are sent Royal Mail Airsure world wide.

There are no reviews yet.

Be the first to review “Toy” Cancel reply