Here are selected excerpts from press coverage over the years, either under the name the Dotmasters or under previous incarnations as C6.org a full listing of events and works under the name C6 can be found here, here and here.

It took 5 weeks to paint this modern dream home, most of the works were commissions from the owner with some older dotmasters thrown in for fun. From the second-floor terrace of this house on the Spanish island of Majorca, it’s clear that this is no typical Mediterranean villa. A connected volume swells up from the earth on one side, a skeletal staircase curls down to a swimming pool on the other, and parts of the exterior are literally awash in graffiti. With contributions from Tec Design, Marcel Wanders Studio, and the Dotmasters and Nick Walker, this resort retreat stands way, way apart from its neighbors.

The coi painting makes the cover of this italian magazine

Still from “Exit through the gift shop”

A chance meeting in LA with Terry Guetta led to a wild night out painting. Terry took me round town helping me get stuff up on the walls in downtown LA while he filmed and held off the police with unfeasible explanations. The subsequent footage made the movie “Exit through the gift shop”  Banksy’s prize winning documentary.

Mr. BrainWash — nom de guerre of the (eventually) exasperating homunculus in the center of Banksy’s many-layered documentary — is either a hoax or a living/breathing symptom of everything that is wrong about pop culture and our unthinking consumption of it. In real life, he is Thierry Guetta, a French transplant to Los Angeles and one-time vintage clothes retailer whose obsession with videotaping every minute of his life has somehow led him to become an unwitting “documentarian” of street art, just as its popularity and mystique are exploding all over the world’s metropolitan centers. (Think New York, London, and Paris.) He was on the scene at the right time and the right place, his entry to this world being an accidental footage he captured of his cousin — the French street artist Invader — at work gluing characters from the computer game “Space Invaders” (made from colorful square tiles) all over the streets of Paris. This chance glimpse eventually leads to other street artists that Mr. Guetta eventually films — Seizer, Neck Face, Sweet Toof, Cyclops, Dotmasters, Swoon, Buffmonster, Monsieur André, Zevs, and Shepard Fairey — big names in this counter-culture art world that works in the shadows, always on the sly, always courting danger and legal wrangling. What fascinates us about them is that they give us works that, first of all, titillate because they work outside the normal structures of the so-called art world, but also because they are witty surprises in paint or stencil that take our ordinary physical world, and gives it a dimension that unnerves or amuses”

The elite of the London art world will convene in Lambeth tonight to examine graffiti in a dank railway tunnel.

It is not a location that has been listed among London’s main cultural attractions. In fact, it compares unfavourably with other dank tunnels in the capital.

From tomorrow, however, when the tunnel opens to the public, the graffiti are expected to attract thousands, because they represent the largest exhibition by Banksy, a determinedly anonymous British graffiti artist. He has gathered 40 of the chief proponents of the form to transform the tunnel into a showcase: Blek, C215, Dotmasters, Sten & Lex, Faile, Logan Hicks, Btoy, Vhils, and John Grider

The call to use Zurich’s facades as an exhibition gallery for graffiti art, the Cabaret Voltaire the wrath of the FDP Councillor Doris Fiala has attracted. She now wants to achieve with a assumption that the Dadaists is deleted from the Lower village, the urban bag of money. “If Dada is so gaga, are better use of funds for the removal of any illegal graffiti,” railed the party president. Costs to remove graffiti from public buildings, the city annually, 3 million.

had reported the last 20 minutes of the graffiti action are in the care of the cultural city of Zurich received some letters from angry citizens, “We talk to Dada, Managing Director Philip Meier were looking for. The call is completely inept and negligent, “said Culture Minister Jean-Pierre Hoby. Nevertheless, he understood that this discussion about the art should be encouraged in public spaces. The cultural center on Spiegelgasse 1 therefore emphasize the subsidies?”Certainly not!”

Meanwhile on the home page C6 of the artist group that called for spray-action in the Dada-Cultural Center, 11 sites of stencil graffiti has been registered in Zurich.

Hype’s love affair with the internet, and the backlash which followed, are remarkable chapters of our recent history.In a little over two years, the worlds of media, PR, and corporate finance staged a breathtaking about-turn in their positions.

The mood changed from fascination with online technology, to disenchantment and eventually outright hostility. Yet all the time, internet usage steadily increased.

Have you ever wanted to stop annoying mobile phone conversations encroaching on your space? Or to learn how to turn discarded computers into a running network? Or to set up your own street television? Or even how to discover how to fund your art projects with unheard of strategies?Now you have the chance to learn how!

DiY SURVIVAL is a compilation of cutting edge strategies, methods and techniques of DIY art, delivering a wide range of practices, actions, events, enterprises and issues which all have to do with the art of DIY, with forms of media subversion and the intelligent sabotage of cultural markets.

DiY SURVIVAL HANDBOOK delivers a mix of Theory, Case Studies and “How To…” whose aim is to circulate radical knowledge, to disseminate practical know-hows and to promote collective awareness against the ego-trip of The Artist.

Book Review from The Spectator
This is performance art meets anti-capitalist protest meets schoolboy prank. Contributors to the C6 collection include individuals and groups from Italy to Hungary, Mexico to Brazil. There is a growing network of tech-savvy artist-activists who network over the internet. Our city streets are starting to bear the imprints of their interventions. An ‘anarchitects’ group, the Space Hijackers, has held impromptu parties on the Tube, and sent suit-clad representatives to snooze on benches in the City of London, taking the siesta to office slaves. The graffiti artist Banksy has plastered London with his jokey, anti-authority images — he put up a sign for ‘designated riot area’ on the base of Nelson’s column and marked ‘designated graffiti area’ on the side of establishment buildings. (In a similar spirit, C6 dotmasters stencilled a urinal on the wall of an alley in Poysner Street, Bethnal Green, which it dubbed ‘La Pissoir’.)
More of the review found here The spectator.

From the BBC online spring 2000

Each day this week we pick a key moment in the shifting sands of opinion.

No. 2: Suspicion sets in 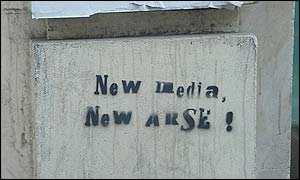 The writing on the wall

The old-school internet community realises the e-commerce bandwagon is promising more than it can deliver.In its earliest days, the internet had been championed by a small, technically-minded community.

They had an inkling of the net’s potential, but even they probably did not know how much hype would come to surround it.

But in spring 2000, a sense seemed to grow among the old school net community – those who had been in the business for maybe four years or more – that there were an awful lot of people piling in who didn’t know what they were doing.

This suspicion of the latecomers grew into contempt.

Typical of the way the members of the old school viewed these people was the character Nathan Barley, created by Charlie Brooker for the TV listings spoof TVGoHome.com.

A June 2000 issue of TVGoHome gives some clue as to how Nathan Barley was viewed: “Nathan Barley rides a tiny metal scooter along the pavement in the direction of an overpriced ‘gastro-pub’ in order to attend a meeting with a group of worthless toffee-nosed sh**s intent on setting up an internet radio station with an elaborate Shockwave interface, eternally doomed to be of interest to absolutely no-one other than themselves.”

One old hand, now a senior figure in the new media industry, recalls the attitudes.”Nathan Barley tells you all you need to know about how the old school new media view the new arrivistes – most of whom are now culled,” he says.”The old school net geeks watched the madness of the last two years from the sidelines thinking: ‘Who are these people?'”

It was in this atmosphere that a wave of graffiti appeared on various buildings in the heart of dot.com land – Hoxton and Shoreditch in east London. (Click here for more pictures.)

The slogan was part of a viral marketing campaign for a series of “events” by art group c6.org.

Artist Leon said the inspiration had been a growing sense of hostility to the way the internet was being used by big business. The slogan had been meant as an dig at the whole new media community.
After working in the industry, he says, he had come to hate the internet.”I mean ‘e-commerce’! Why would you want ‘e-commerce’? That’s what you’ve got shops for. And banks online? The banking world is so strong why would they have to go into the internet?” he says. 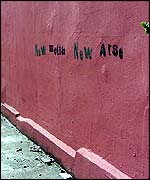 But the slogan struck a chord with the net community purists and found a currency of its own. The artists now sell T-shirts and hooded tops with the design printed.

>One net veteran says: “I first saw it right at the height of the microscootered mullet-multimedia scene in Hoxton a good 12 months ago.

“I think it raised a giggle among the old guard, those of us who’d been around since Mosaic [the early web browser which preceded Netscape]. Sometimes that laugh was a nervous titter as you wondered whether you were succumbing to the hype and hysteria yourself.”This recognition had not been something Leon and his fellow artists had expected.”The graffiti was done before the dot.com thing crashed, and now it has it holds a completely different meaning.

“Now it’s the people within the industry who are saying it – before we thought it was a statement outside the industry, aimed at the people in the Shoreditch crowd.

“It’s almost been taken up as a banner by the new media industry because everyone’s been sacked or made redundant.” And he, at least, has been encouraged by the backlash against the internet. “It doesn’t really make a difference if a hundred dot.coms crash, the kids are still putting up their MP3s and their warez,” he said, referring to files and data they want to share.”The real utopian dream that this would be a superfast information highway for everyone to exchange information and ideas is still there.”
>