Well it’s been a great few days, the weather has been great, St Ottilien is an amzingly peaceful and beautiful spot and the people have been amazingly helpful, chill and entertaining. Arrived after a hectic couple of weeks in Stavanger for Nuart and a really break neck stop in London on route to Munich.to say this monastery is a change of pace is to understate it. Curated by Vis a Vis with the hleping hand of Loomit the mission for 12 artists was to paint large scale works around the Monastery outside of Munich. Yes thats what i thought, crazy. as it turns out not so crazy the works work well around the place and the artists have really taken the theme of heaven meets earth into their murals….I know what your thinking…what on earth was i going to paint….me too. So i squared it with them first that it would be ok to paint a massive pile of trash. So far so good. So half way through a massive pile of trash, its 12 feet high, (see pics below) i had just finished for the night when the producer of the festival a nice guy called Al;exander came up to me and said “where’s the rabbits?”
“That’s funny” i said “the guy who’s wall it was was asking where the rabbits were too”. (hes a butcher and the building is a slaughterhouse, makes good sausage apparently) The producer says “you said you were going to paint a pile of rabbits”I nearly shit myself laughing, No mate a pile of Rubbish! 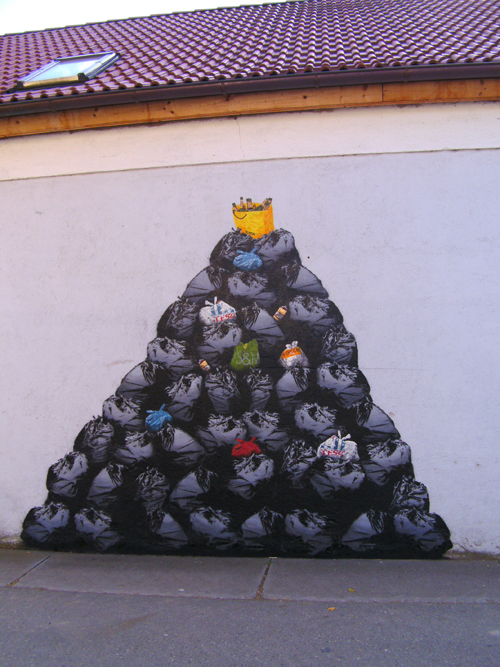 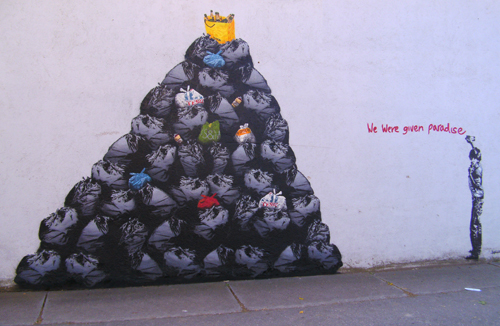 To bring it on message with the projects title i added the boy writing “we were given paradise” as much to make a comment on them letting me paint as to make trash on their walls as the general decline of the world into detritus entropy.  (just a construction shot below to give you some scale) 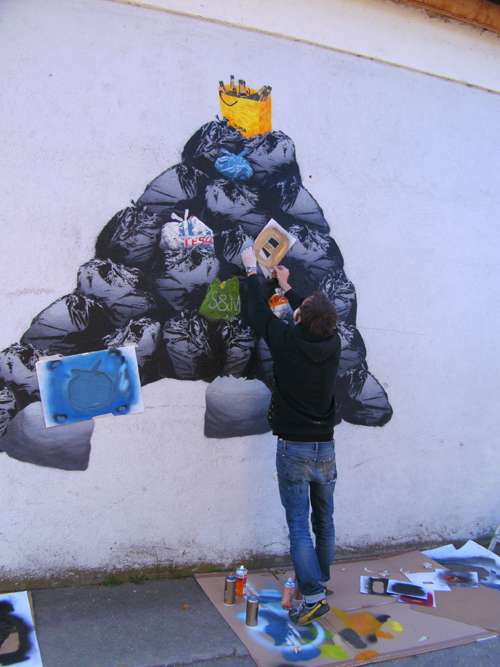 Thanks to all those who made this possible especially Father Cyrill, Christian, and Alexander who has more rabbit than sainsburys.