With the media reporting that the conditions in the migrant and refugee camp in Calais , where about 4,000+ residents, including an increasing number of women and children, are living in conditions “far below any minimum standards for refugee camps” its hard to ignore calls that ask you to help. On friday night, I had just finished the ‘Biggest Toy in Toytown’ piece mentioned in the previous post when the phone rung. The Connor Brothers were calling to ask if i would help them build some shelters for some of the more vulnerable residents in the place they call the Jungle. 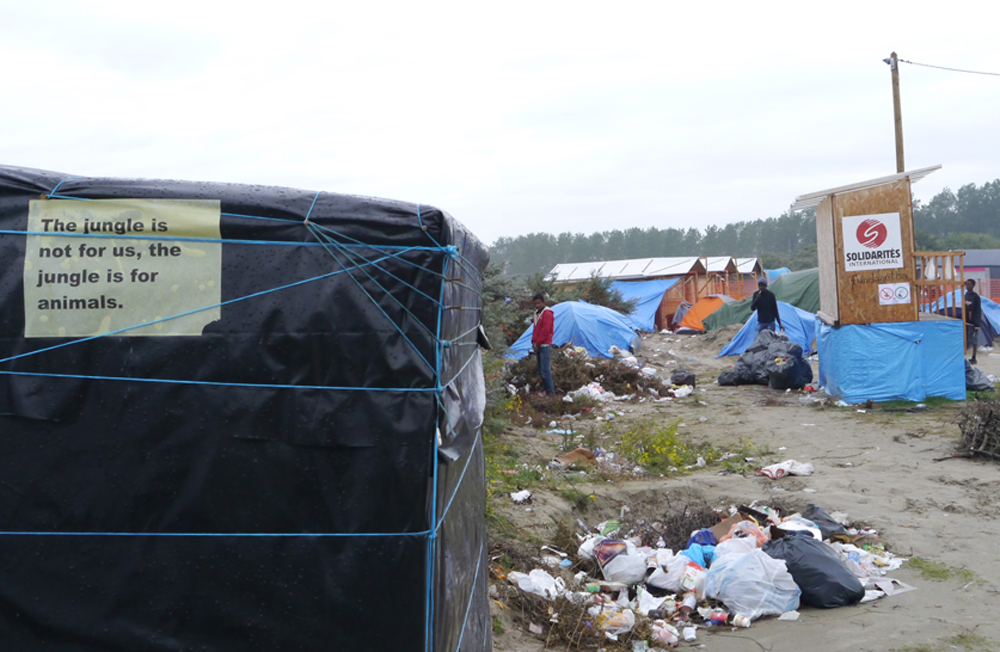 It’s not often you get asked to directly to make a difference in stories you hear about in the papers, so i said yes. We set off to France on the tunnel the next monday started work, money from a Connor Brothers charity print release had been sent before we arrived and lauberge des migrants  had materials waiting for us. There are a core of volunteers that make sense of the sprawling squalor, it was hard to know who to help and where to start, but with help withing the camp (mostly David) we soon started making shelters for families. 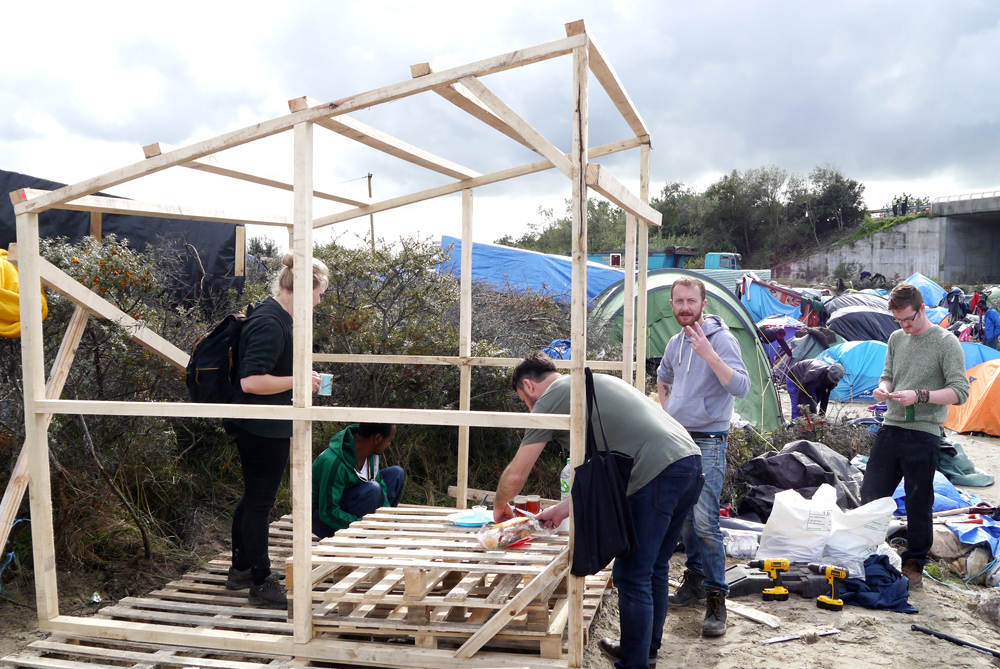 Here’s our first shelter and occupant family, Coptic Christians fleeing persecution in Eritrea, they asked me to put coptic crosses on the doors, proud of the faith that was in part responsible for their displacement. Luckily i had some old religious themed stencils Adam & God and angels from Sistine Madonna. 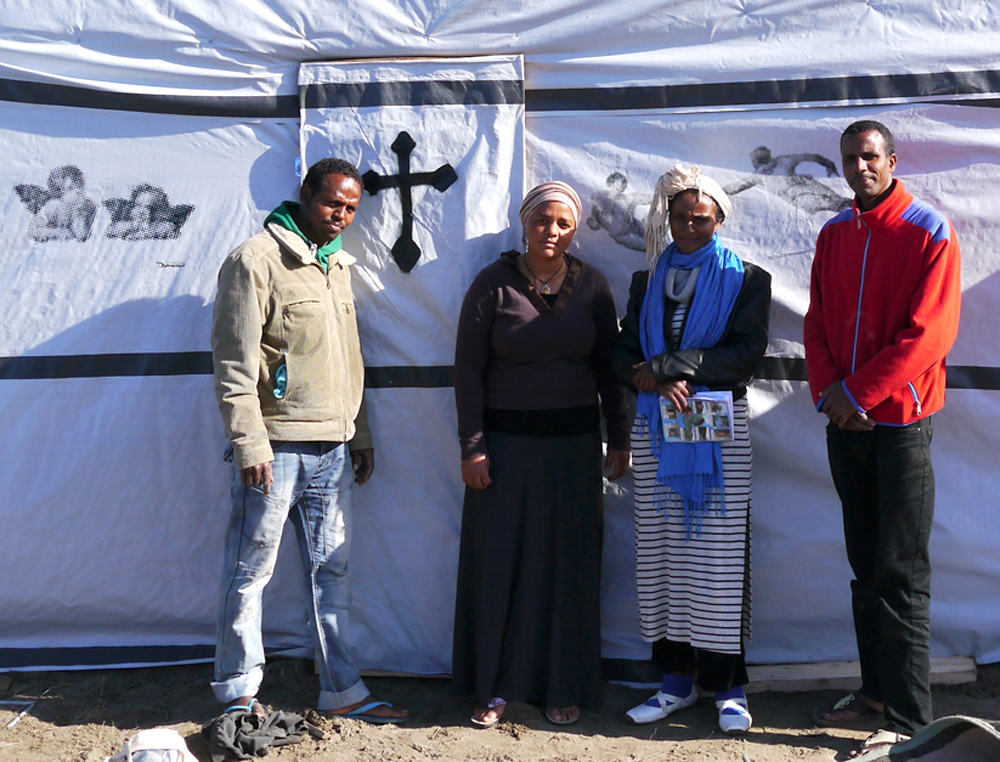 Day two brought very different problems, after a days had work on our second set of shelters, we were just packing up and walking back from the Eritrean area when fighting broke out between the migrants and the CRS, a back and forth antagonism between the two drew tear gas from the police and stones from the migrants on the road below the motorway. 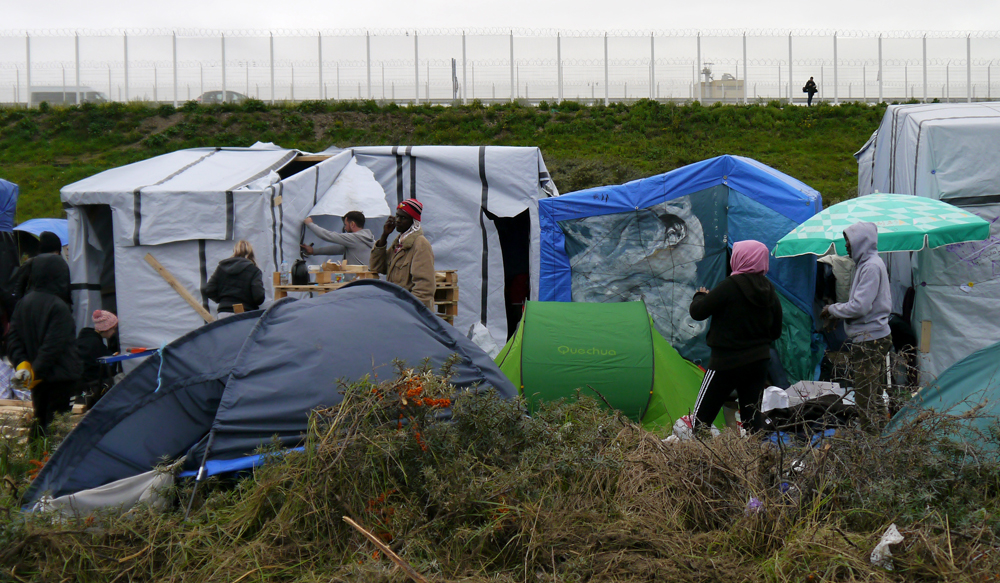 Twice as we tried to get into the vans we were tear gassed, wether it was at those throwing rocks or us opening foreign registration plated vehicles, it is hard to tell. Getting a face of gas with your eyes burning and streaming doesn’t make you very charitable to their motives. However we got out in the end safe and sound and returned the next day to build more dwellings for the folk who are forced to live in these dire conditions.

We made a difference to a small path in the camp, it will take months to get the most vulnerable the women and children housed for the winter with more turning up each day it’s hard to see an end to it. We will be back, having learnt some lessons in dealing with the terrain, people and materials it would sad not to make the next trip even more effective.