You will have to bear with me, the photos from here are taken on my phone. Some nice person at Glastonbury decided to pop into the Tee Pee to help themselves to my camera….thanks. The funny thing looking back on the shots i have taken are that the pictures they take on are different from those you take when you consider the frame for a camera. Probably lots of reasons, mostly they normally only see the light of day when shown on the phone that took it and  may explain the following posts.

Anyhow back to as silly as it gets…here is as silly as it gets, Dan decides to base up some boards for work the next day, he’s taken 5 hours to get on site, its midnight, he has one light, a 3 day old roller and the dew is heavy, can he make the deadline?

Here’s a great shot from the Mighty Booth (facebook)or here (offical site here) which was set up next to us at Glastonbury, Its a staff shot of the our sideshows barkers…barking

Months in the making, finally after two weeks install on site the sideshows were ready for the public, The Barking showmen had their costumes, make up and were drunk enough to berate the public, so on first friday of the festival the sideshows opened to huge crowds eager to try their luck on the the unfairest ride in the unfair ground.

All the unfun of the fair, there were steady crowds who lined up to either throw baby doll body parts through the mouths on the gobbler or knock down the heads on the crackheads. The nights rolled on the  barkers got horse, some of the heads were smashed clean of their posts (can’t be a lot of love out there for some of these celebrities)

Over 2000 played during the weekend, dead fish prizes were won by all that played and a lucky few won the star prizes of our limited edition dolls. The rides could not of been done without the fantastic help of our crew, thats Caroline, Ruth, Cy, Finbar, Pete, Lizzy, Ross. Thanks guys you made a great weekend! Crack Heads and Gobbler are now touring sideshows available for all your twisted fairgrounds and festivals, use the contact form for inquiries.

Finished the last piece of the Gobbler side show for Galstonbury last night, 24′ x 8′.  Its the header decoration making the sideshow stand at about 18′ high. Now its just a case of packing it all and moving it on site and erecting the thing. I cant wait till we are throwing baby heads through those open mouths…..confused? wait and see! 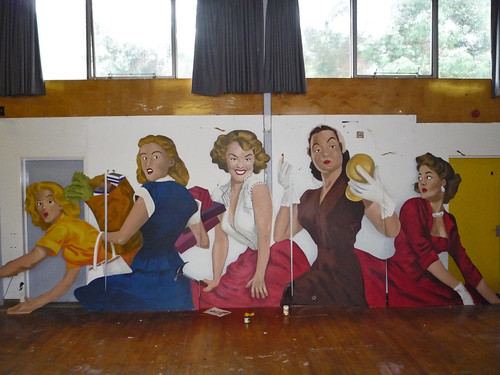 Well its been 3 months in the making but the finishing touches are being put on the jokers side shows for the unfairground at glastonbury. Soon to be packed off , a final coat of varnish is all that is required. Thanks to Teddy Baden and Ben for letting me use their gym to construct the monsters. 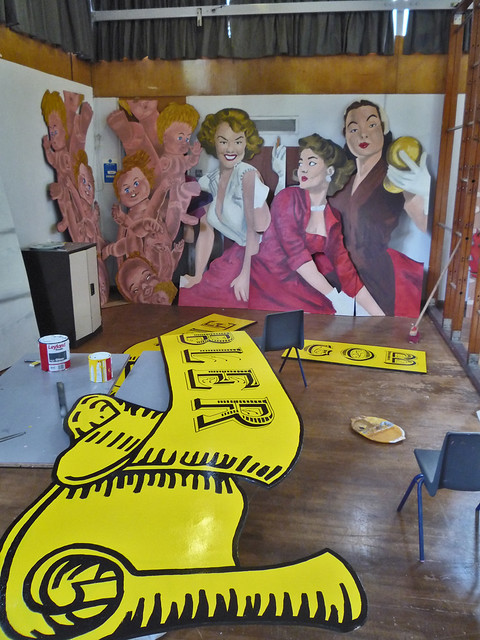 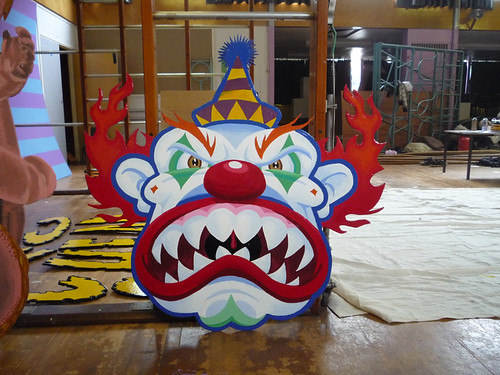 Not much content as yet, but during the build up and while festival is on the site will be updated, check out The Unfairground
Join Glastonbury legends the Mutoid Waste Co. at their party at the end of the world, featuring their latest sculptural lunacy: The Hellcopter. The nightclub of your wildest nightmares in the form of a Royal Navy helicopter crossed with a preying mantis – dare you attempt to blag your way into the secret members lounge hidden inside? Also presenting their mechanical menagerie of mythological beats: The Unnatural History museum, PLUS daily Wacky Races mutant vehicle parades!

The brave can take a stroll down Sam Haggerty’s & The dotmasters  Joker’s Sideshow Alley, where the lucky can win a limited edition Happy Doll, or indulge in the hedonistic delights of The Acid House hosted by Happy Mondays mainman / Celebrity Big Brother alumni Bez (maracas optional). And if you’re still looking for trouble, you can always pick your way through the aircraft graveyard and prop up the bar in the company of an undead aviator at the Apocalypse Hotel, or slip on your blue suede wellies and get down with the robots in Reverend Sharky’s Church Of The Holyroller, playing anything from Voodoo Swamp Blues to Jungle!

Just back the secret workshop deep in the country where preparations for Glastonbury are in full swing. Steel frames are coming together, the ‘barkers‘ have met, and the ‘oncers’ are emerging. As you can see the prizes are really coming along, 3 balls for knicker, 7 balls for £2. Try your luck in the unfairground at Glastonbury, between Shangrila & Arcadia. Look out for “CrackHeads” or “The Gobbler” sideshows with a difference from the twisted minds of the Dotmaster and Sam Haggerty.

Early bird and advance tickets get you into the after party and the Originals and Prints Prize Draw.

High powered Glastonbury festival meeting at a secret location (a pikey camp in Worthing) quickly descends into target practice. Sam and Gobshite pump and load. We are Getting tooled up, lets hope the tool box is a little more expansive than the one pictured.

This week the full Unfairground ™ Glasto crew got together for the first time… Yes it was messy, scaff pipe, wood and general workings are getting sorted, and next week the side shows go into production. But don’t worry you will be in safe hands….check out Fatties below.