Family and friends are putting together a new festival venue down in the docklands that you will hear more and more about during the coming months. They start with a free party that is set to rock!  See you there!

A great night out at Chrome & Blacks 3rd birthday last night, a motley crew assembled, fore warned that although paint had brought them together, this was not the time and place. A load of familiar faces, even if no one knew eachothers real names. After a raffle and some impromptu break dancing (jeez i haven’t seen anyone pull those moves on a night out for a decade) It was off to the shop for a lock in surrounded by paint and fragrant smoke. Well done Lads! Bloody great night from Londons premier Art suppliers….ahem.

Never seen the complete Belton range  without gaps in the racks….beautiful !

Sickboy and I  hit up a mates flat in central London a couple of weeks ago. Sickie was filming a short film to promote his show in San fran this week at white walls . Nice vid, although there is a blink and you will miss it shot of me painting a wall in the front room. I bet the shows a corker, if your in town post a dream or two in the post boxes he’s dropping round town, or drop by the show bound to be a crazy mix of installation and great paintings.

Thanks to every one who came to the sovereign yesterday, it was great fun and we raised a stack of cash…final figures are not in…everyone was a bit tipsy in the end. The money will all go to help fight this ludicrous court case.

Just a reminder that i have some new original works and some older works being raffled on:
SUNDAY 12th FEB FROM 2.30pm THE ROYAL SOVEREIGN, CLAPTON 64 Northwold Rd, E5 8RL.
I mentioned a couple of weeks ago here that we are holding a fundraiser for a friend Patrizia, an Italian activist’s legal fees fighting a proscecution for seeking the truth about a death in the cells in Peruga Italy.
They will be stalls selling second hand stuff, kids stuff, collectables and general tat as well as a raffle where you can win original works.

Had to share this with you all, craziest tattoo i’ve ever seen, even more weird if you know who’s leg its on! I ain’t telling, if you know you know, still a bonkers tattoo!

Carrie Reichardt sent me one of these beautiful tag angels in solid brass.

Ok, it was a strange day and probably not the crowd that most people were hanging out with while kate and bill got married.  Baroness von Reichardt (aka Carrie) invited a whole lot of friends over for an alternative street party. Where, you may ask? Chiswick! I know bloody weird in itself! So weird in fact that Channel 4 were in attendance for their Unofficial Royal Wedding program that goes out on monday 2nd.
Although you could avoid watching it,  cut short due to the breaking news of the death of osama bin lightbulb. The short version is a blessing though, forgettable.

An amazing day, allot of fun, I set up shop making MonroER tenners, Lots of folk brought their money to be doctored, did some twenties and even an Egyptian 100 pound note for Nick Reynolds, the sphinx getting the yellow hair treatment. 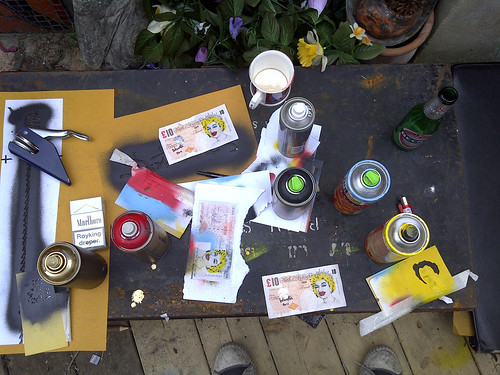 Had to share this, i won’t name names (you know who you are), but thats some laptop!

Stokes Croft is a weird part of Bristol, run down and forgotten by town planners it has a strong community and vibrant feel. There are numerous agenda driven stories circulating around the events of the night. The locals painted by police and the authorities as yobs and vice versa. All i know is this is probably the best shot video of public unrest i have ever seen! What i know of the local people is that they are passionate about their forgotten corner of town, their  comunity and the unity they have found from direct action wether that is the graffiti or their humorous but effective self organization (see http://www.prsc.org.uk/). Having exhibited, worked and painted in the street shown i can vouch for them being a self helping community of non aggressive, thoughtful people. Free Stokes Croft!