The crew of ‘nutters’ behind Creative Routes ‘MUSES CAFE’ events are once more teaming up with campaigning organisation MAD PRIDE to stage a special event to mark the international ‘HOLOCAUST DAY’ memorial.
In Germany in the 1930’s the Nazi’s put out propaganda ‘newsreels’ showing images of mentally ill and disabled people alongside slogans telling the taxpaying population that these ‘degenerate’ people were costing them money to keep alive as a justification for the ‘final solution’ of exterminating them in the concentration camps.
MAD PRIDE are asking the question ‘how far does this differ from the current government and media propaganda which aims to label all welfare benefit recipients as ‘scroungers’?’
Vulnerable people at the bottom of the social ladder are once again being made to be the scapegoat for the bankers and capitalists reckless mishandling of the economy.

You may of seen the posters, Tee shirts, placards or the shutters on Curtain Road. Well here’s the silkscreen print. Designed for Mad Pride’s current campaign against the benefit cuts, this is a two colour hand pulled silk screen in an edition of 50 measuring 57cm x 38cm on 300gsm somerset antique white. 25 of the edition of 50 are available from me here at the price of £30 each, all proceeds going to Mad Pride 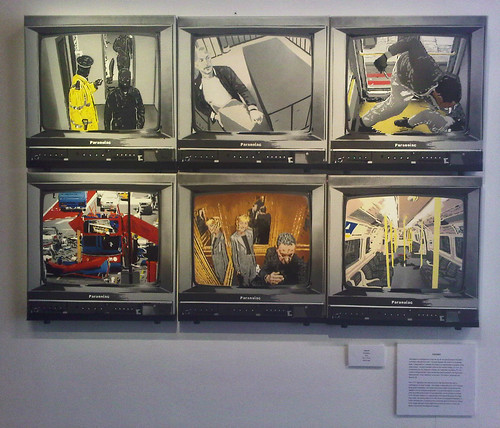 So it was a mad 24 dash to get the thing together but 6 of the 9 of the ‘Capture’ series went on show at the Black Rat Press gallery in Rivington Street last night. A series of stencil painted canveses depicting famous cctv footage. A decision to make a more interactive element at the last minute,  resulted in  manic midnight carpentry, thanks shaun. The final 3 of the series will appear over the course of the show, shambolic i know, but its been hectic and blah blah blah.

It was a busy night a big thank you  to all who came! A special thank you to Fatty and his Viking  longboat. 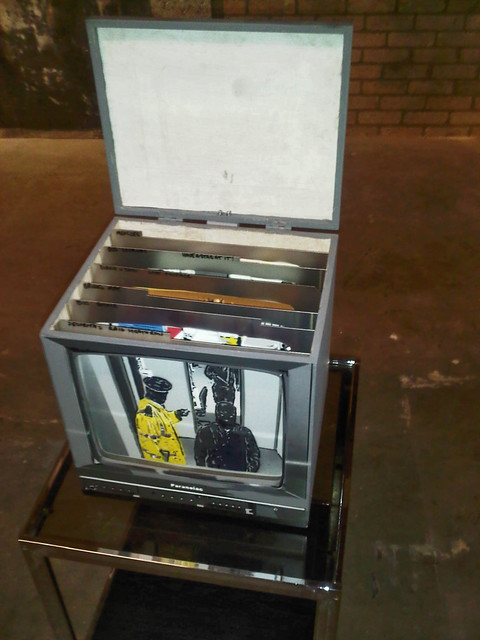 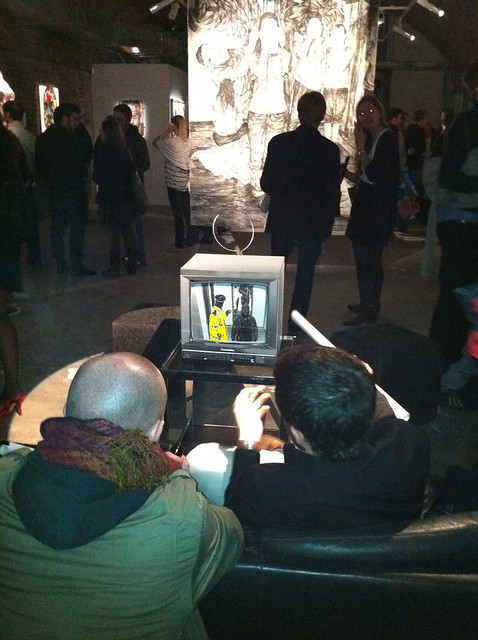 More photos of the works can be found here

So the Mad Pride tribe came together for the day of action in Hyde park at speakers corner yesterday. As i arrived the effigy sporting a double faced head (made during an effigy making workshop at Core arts the week before) hung from a tree. As the chill wind blew, it spun to reveal the lying eyes of both cameron and osbourne. The demonstrators sporting their new Mad pride tee shirts and holding the placards of earlier posts, listened to rallying cries of defiance and sad tales of psychiatric miss adventure. These cuts shouldn’t hurt our societies most vulnerable but  it seems that those whose voices are the weakest will be the ones who pay the dearest. After poetry, call to arms and a  two minute scream, the effigy was beaten with some gusto, its entrails (sausages) finally being cooked on an open fire made of its body and devoured by the crowd.
The event was important in generating a sense of unity among the displaced and medicated, in these troubled and stressful times there may not be much that separates the sane from the mad, there but for the grace of god go i. Its been a busy week in the dot studio with preparations for the Mad Pride demo. Placards have been made for the event and 100 tee shirts for the demonstrators. I think the tee shirts will be on sale from the Mad Pride website in the near future. Mad Pride have asked me to provide the placards and design tee shirts for the demo on the 26th of October. So here’s the finished item. The papers are starting to break down the proposed cuts, and to be honest they are frightening. Why should the most vulnerable citizens pay for the mistakes of our richest ? Ah… thats right, because they have no voice or power. Glad we live in a caring society eh? Come along on the 26th and support our nations Mad people, help them get the care they deserve! They are back! They are Mad and they are proud! The Dotmasters have had a long history with the Mad Pride events over the years, providing visuals for their gigs and events. With the swinging cuts planned in both the social services and sickness benefits it seems the time for MAD action is nigh. Mad Pride is supporting survivors of the mental health system to organize a Day of Action on 26th October. This will be just after the release of the Government’s “shock and awe” Spending Review – which will outline cuts from 2011. Specific details of the event will be finalised over the coming week check Mad Pride or here for details.