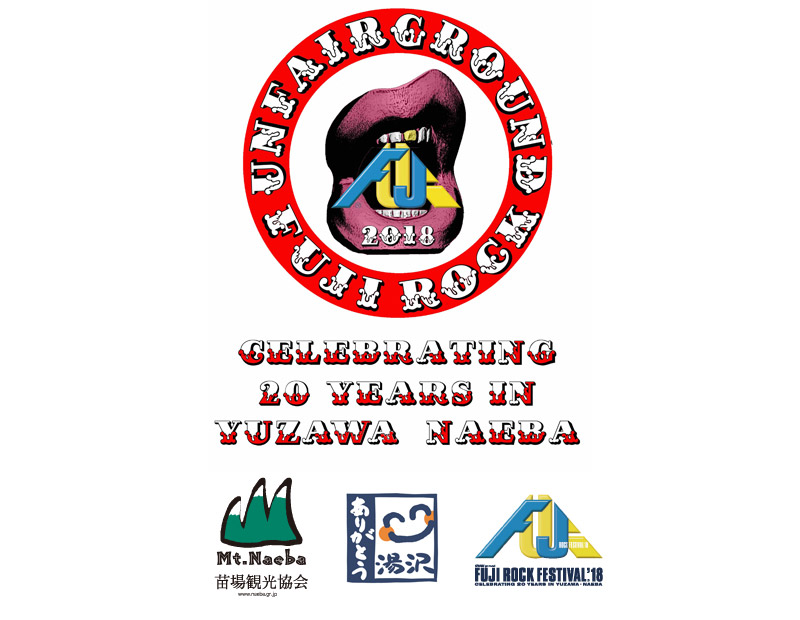 There’s no Glastonbury this year so the Unfairground family are off on a rock and roll holiday to Fuji Rock Festival in Naeba Japan.

Each day at the festival see’s each one of our glastonbury venues, The Acid house, The bangin’ Salon Carousel and Jagz Kooner’s Acid lounge  take control of the music with the scene set with sculptures from the Unfairgrounds own Ringmaster Sam Haggerty .

This years artists will be painting huge stand alone walls built against the backdrop of the Naeba mountains. Both Ben Eine and Inkie will be joining the Dotmasters and our fave local guy Masagon!

With The Pyratrix Circus bringing the performance side of crazy to the field, the whole unfairground Uncrew fam up sticks to a far flung field in the mountains of Japan. 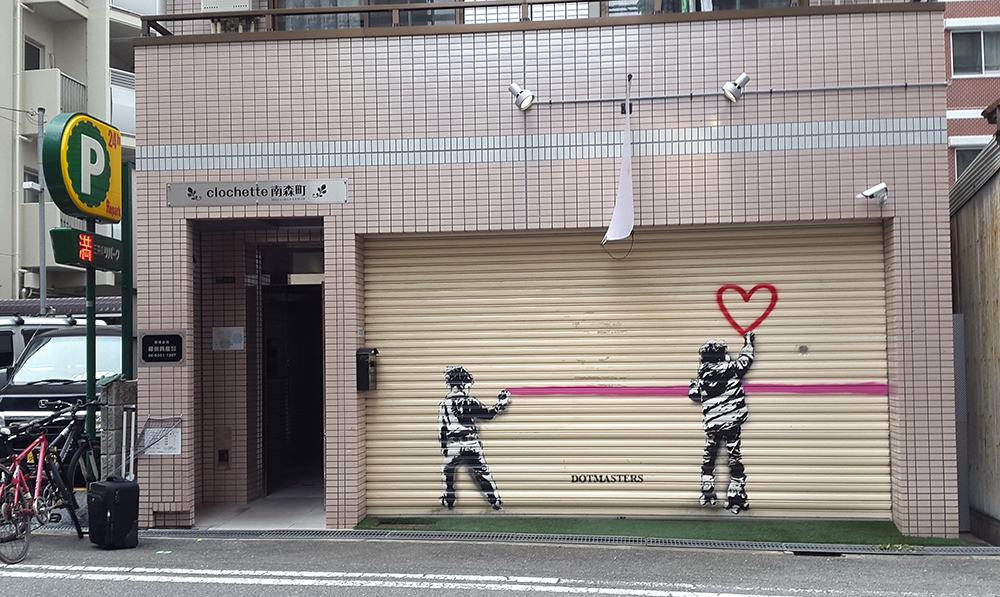 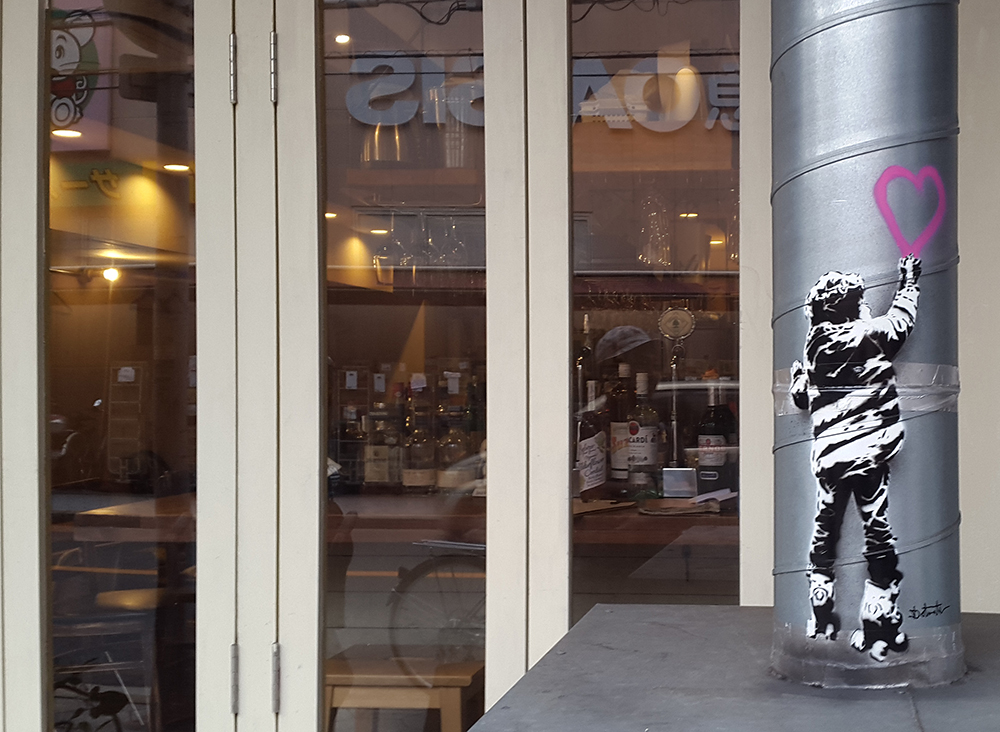 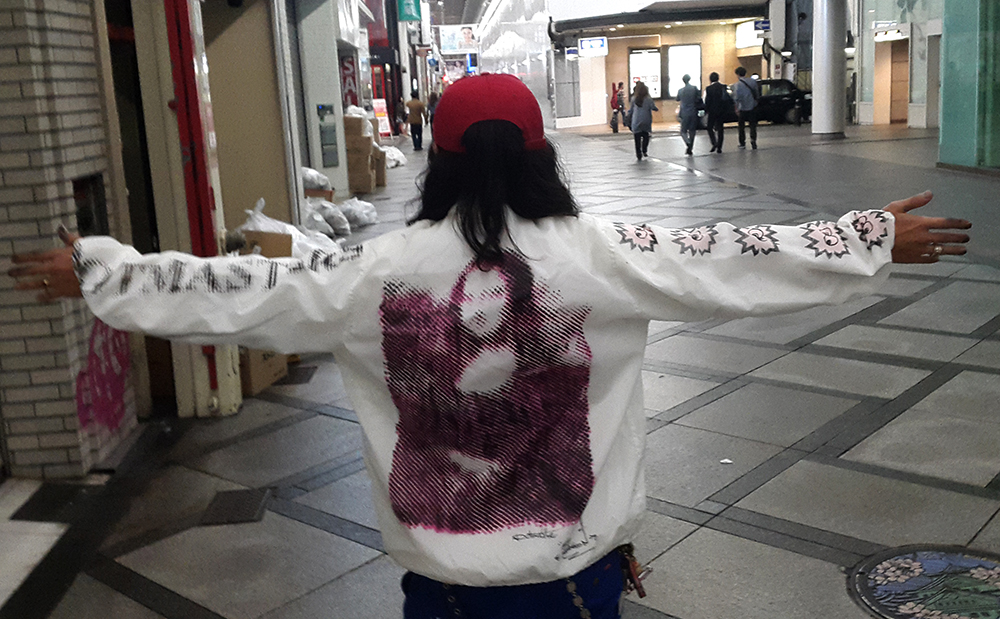 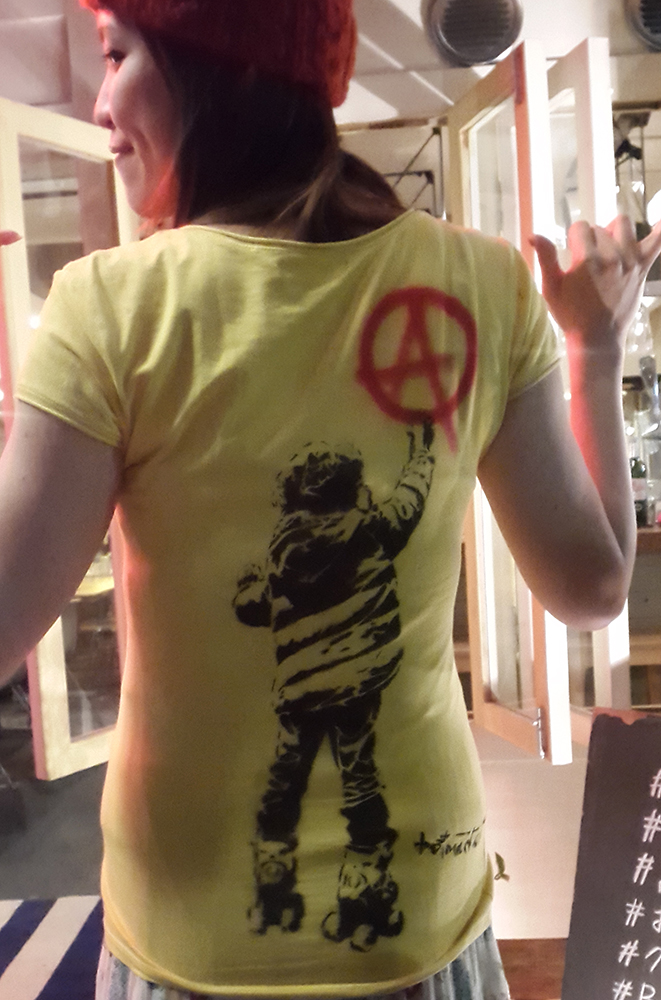 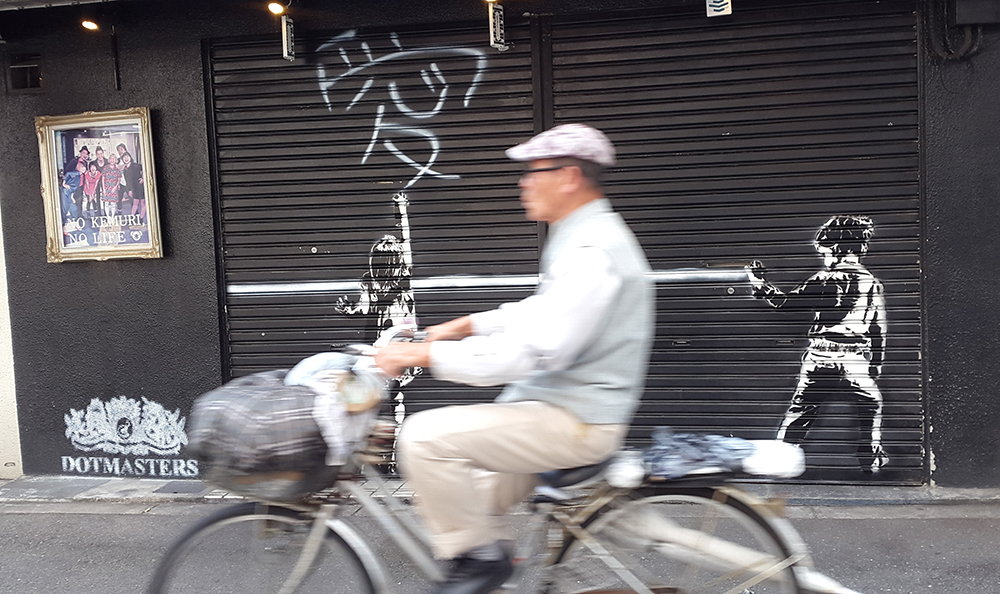 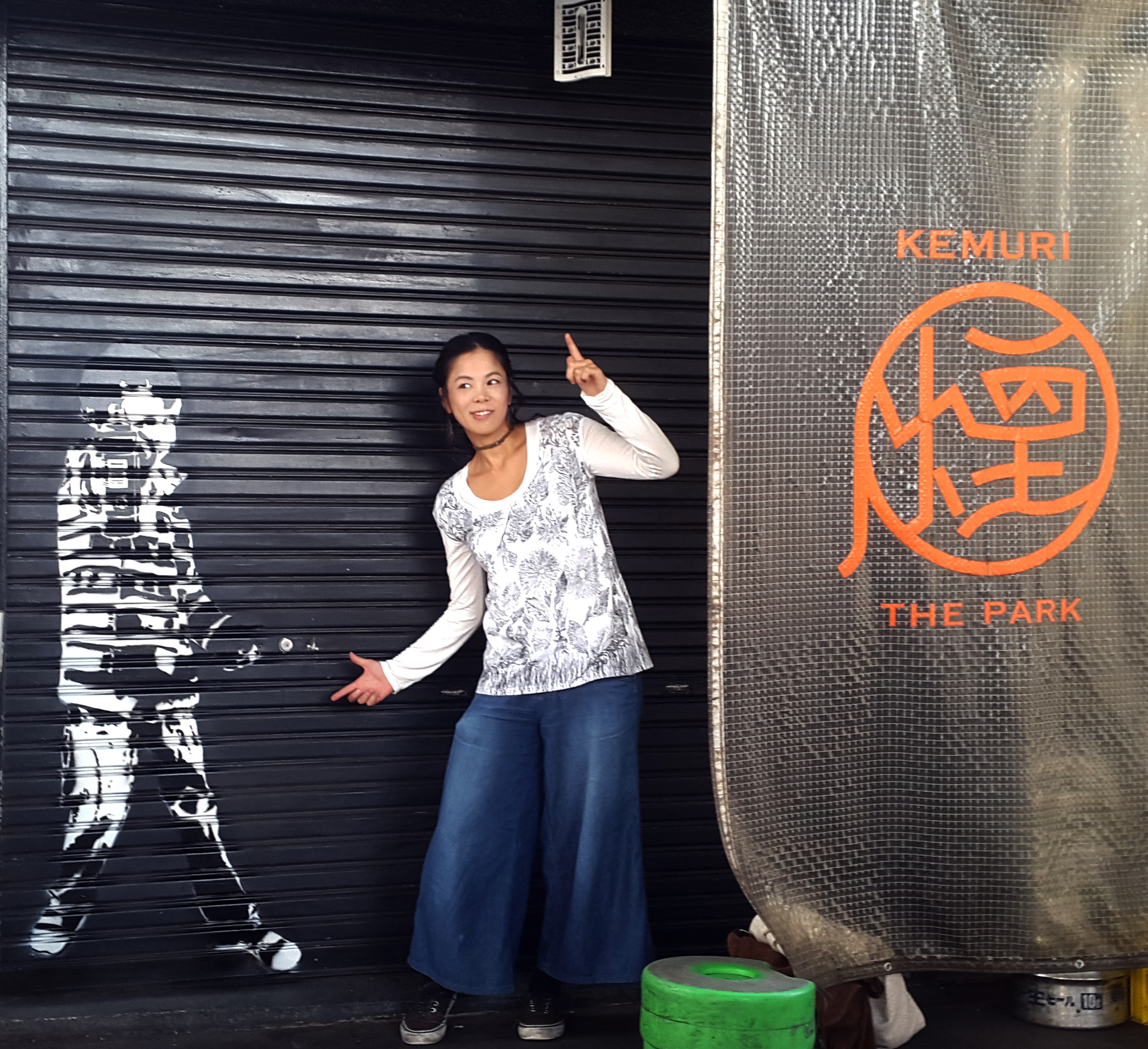 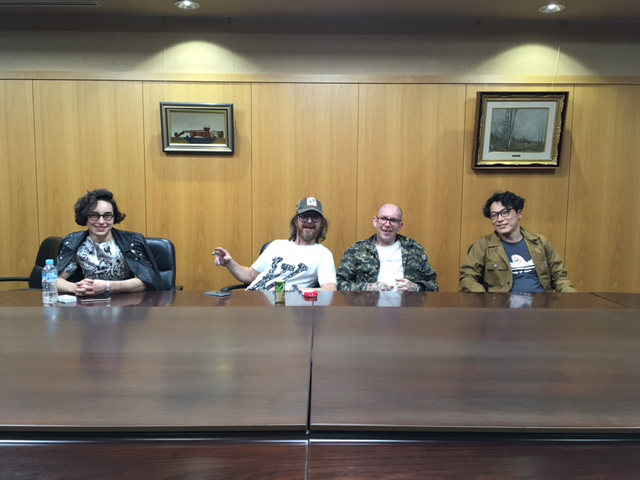 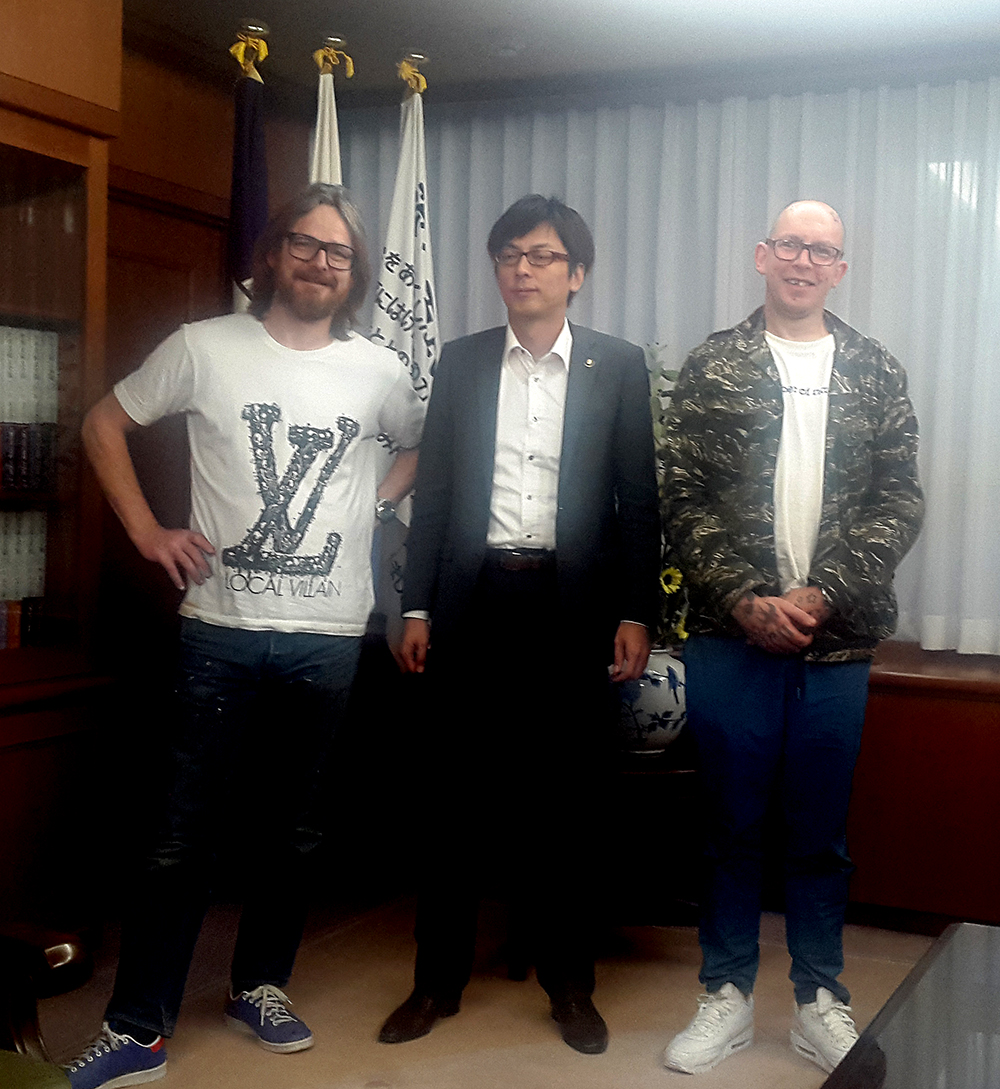 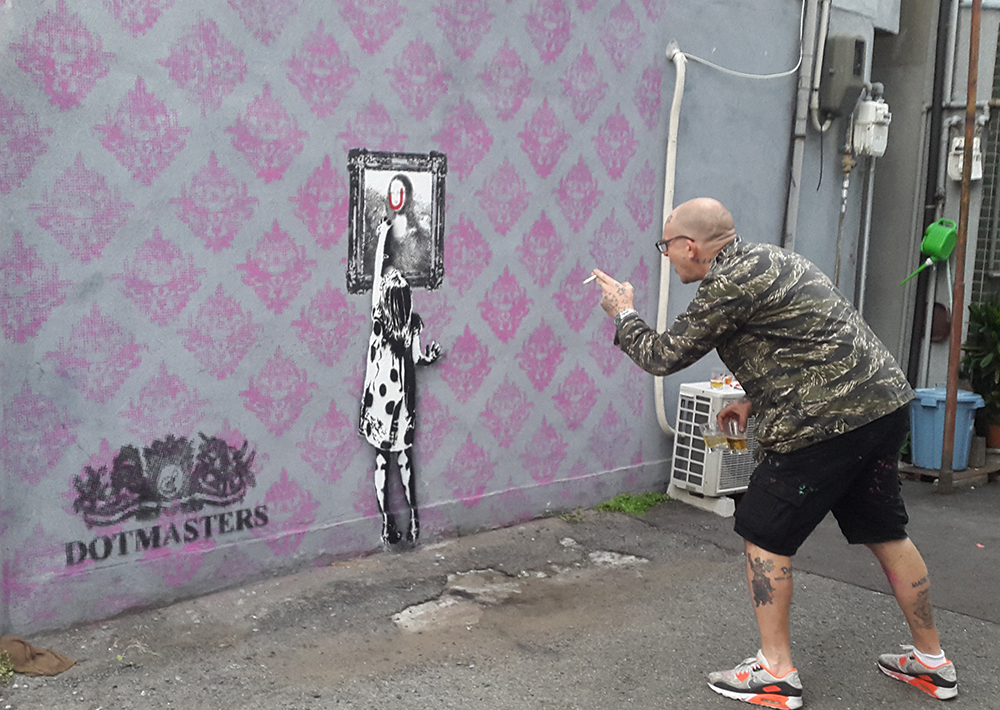 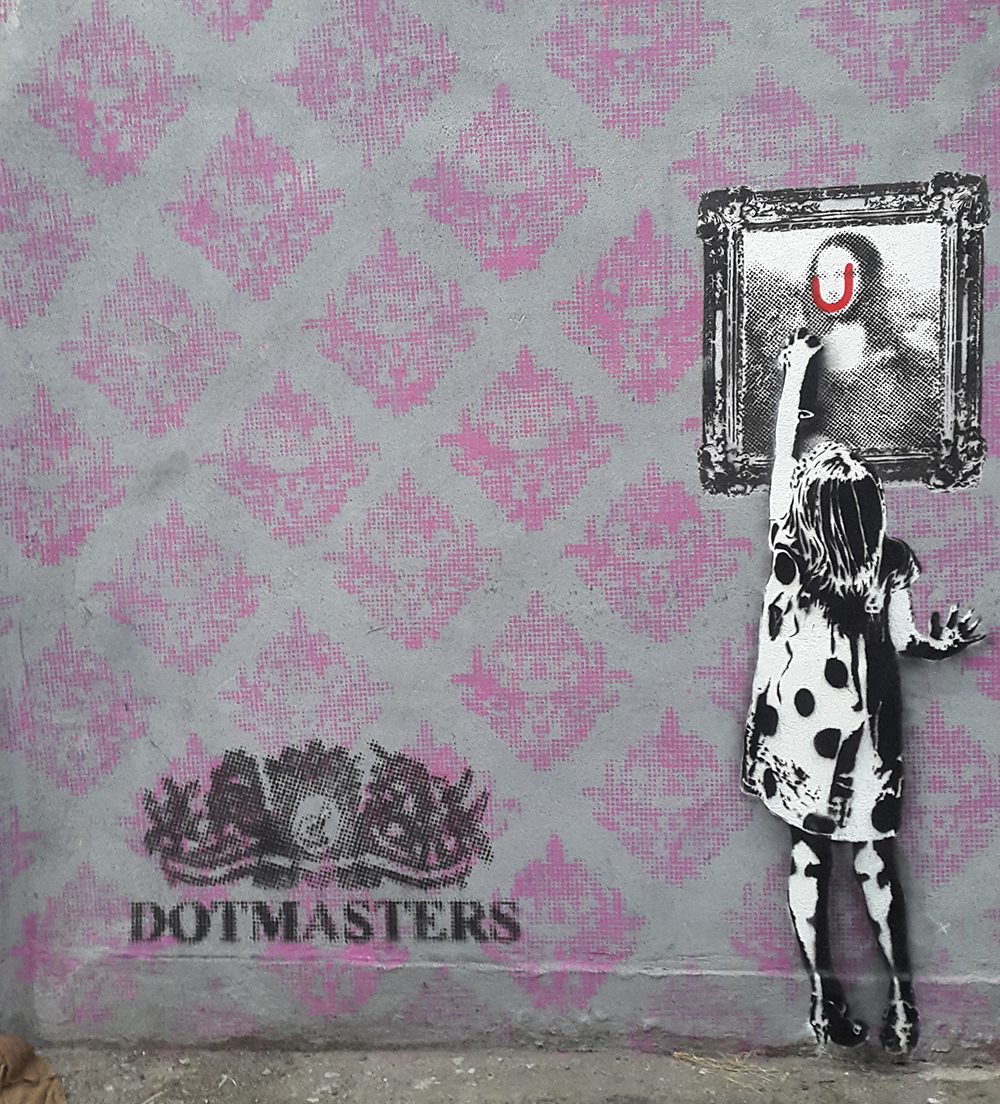 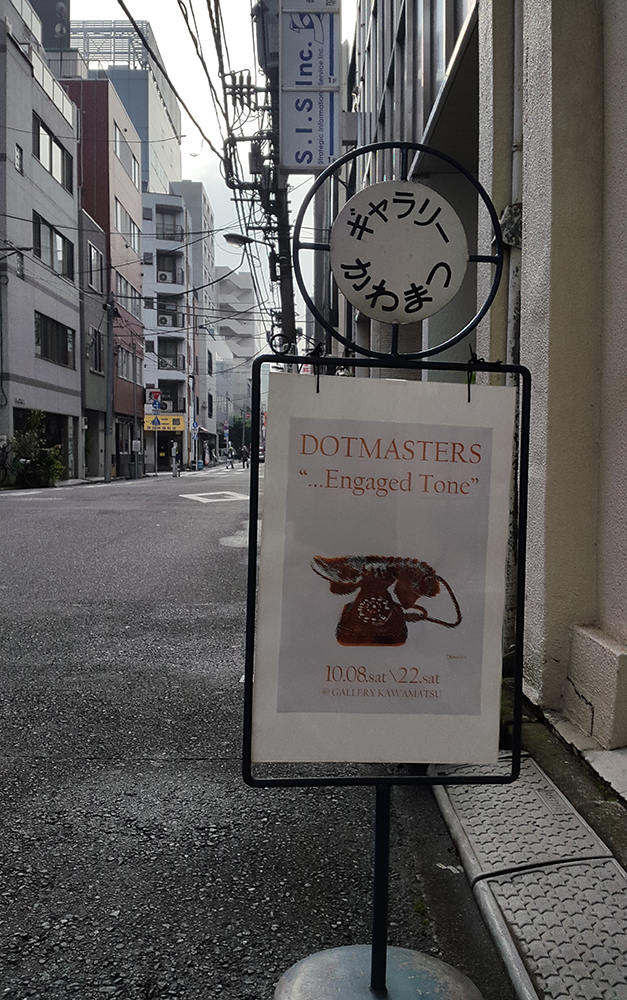 Just back from Japan, i had a great time! First off a week in Tokyo with Gypsy eyes showing me around town, helping me find walls and the gallery Kawamatsu for a show on the 8th of October. I first visited Kawamatsu 4 years ago when i first had a show in Tokyo. The owner is a keen street art fan and had one of the only walls that you could paint legally in town. 4 years later i was exhibiting inside. Thanks to everyone who came, bought something and drank a little too much Asahi beer, it was a great night! 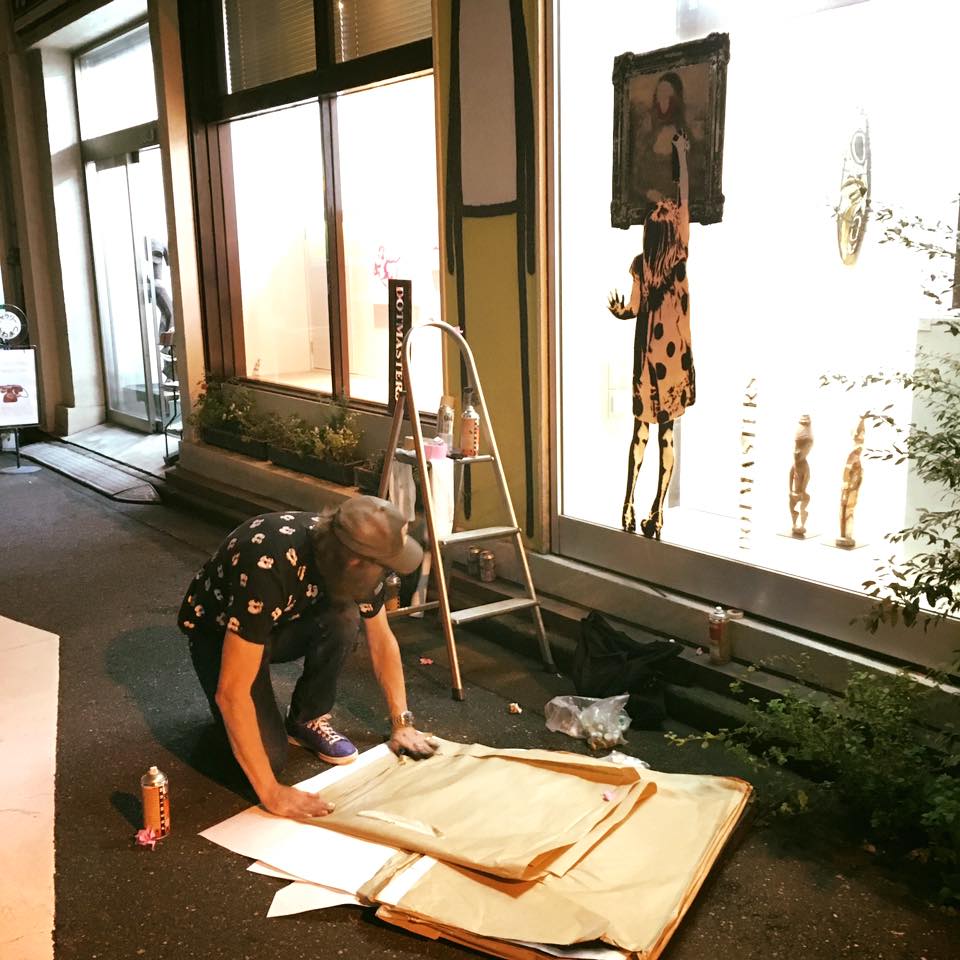 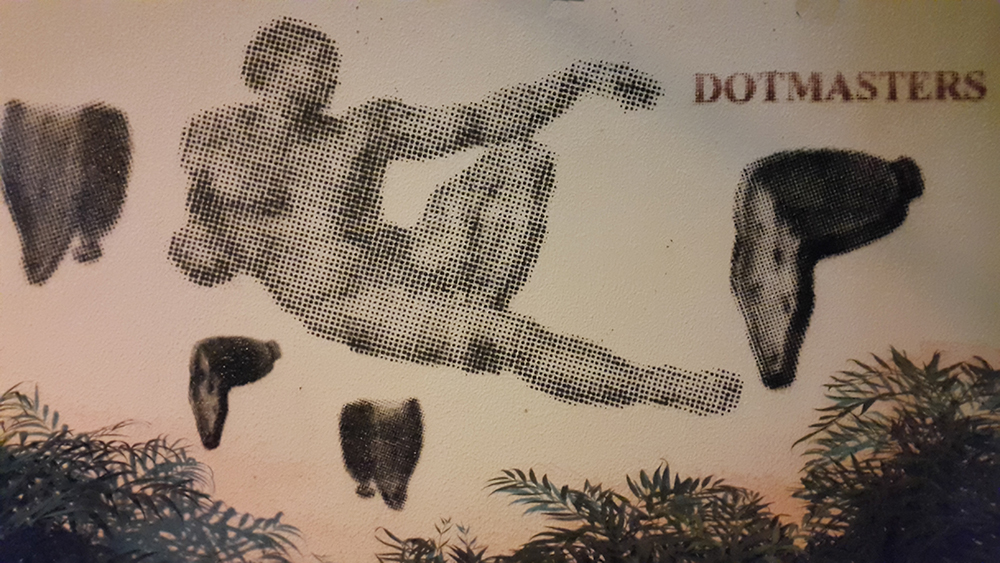 Finding walls to paint in Tokyo is tricky, Its a dense city with complicated wall ownership and a young appreciation of art on the street. However Gypsy eyes pulled it out of the bag with this stunning newly renovated cafe/bar soon to open called Kitsune (fox). A weird shape and full of windows with only the stencils i came with to work i think it worked. God knows it took us a couple of very long days to finish! Thanks to Taro who was an incredible help thorough out the week and to Murao who drove like a crazy man to get me around! Thanks all you made a fantastic visit! 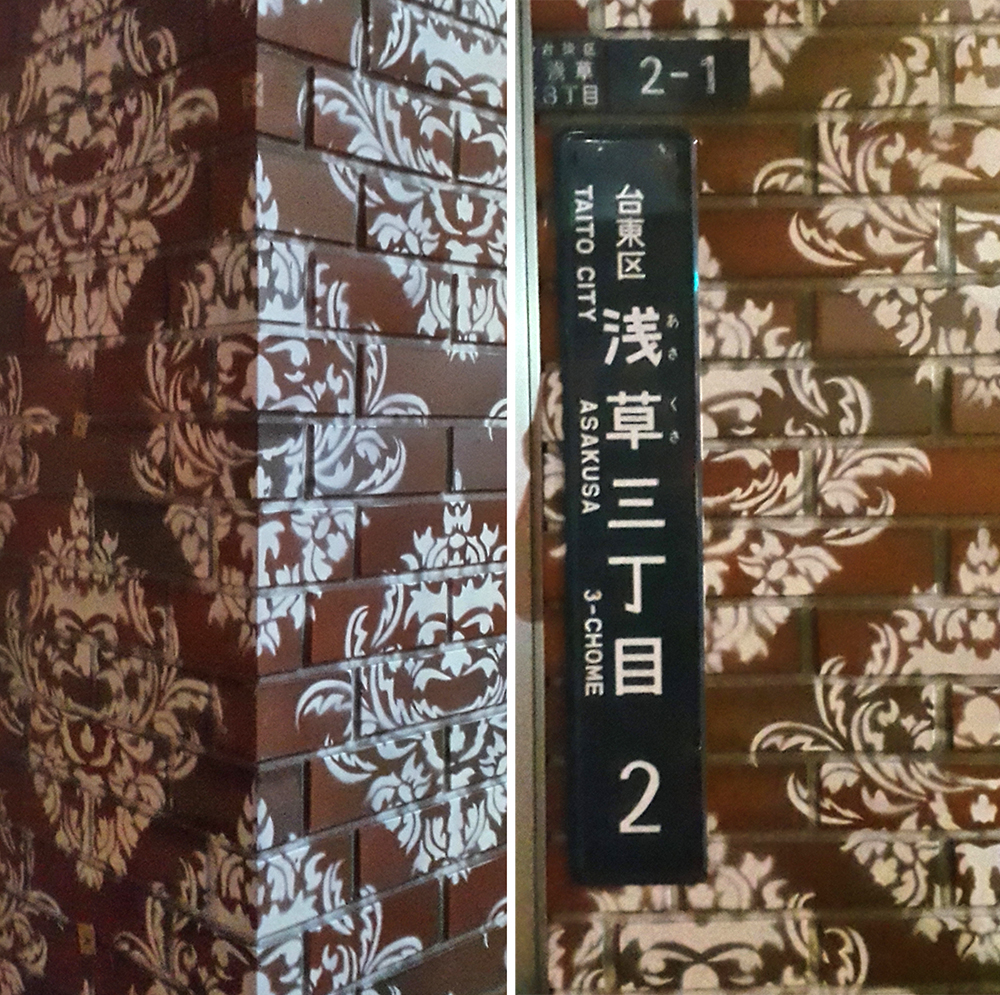 address of the cafe 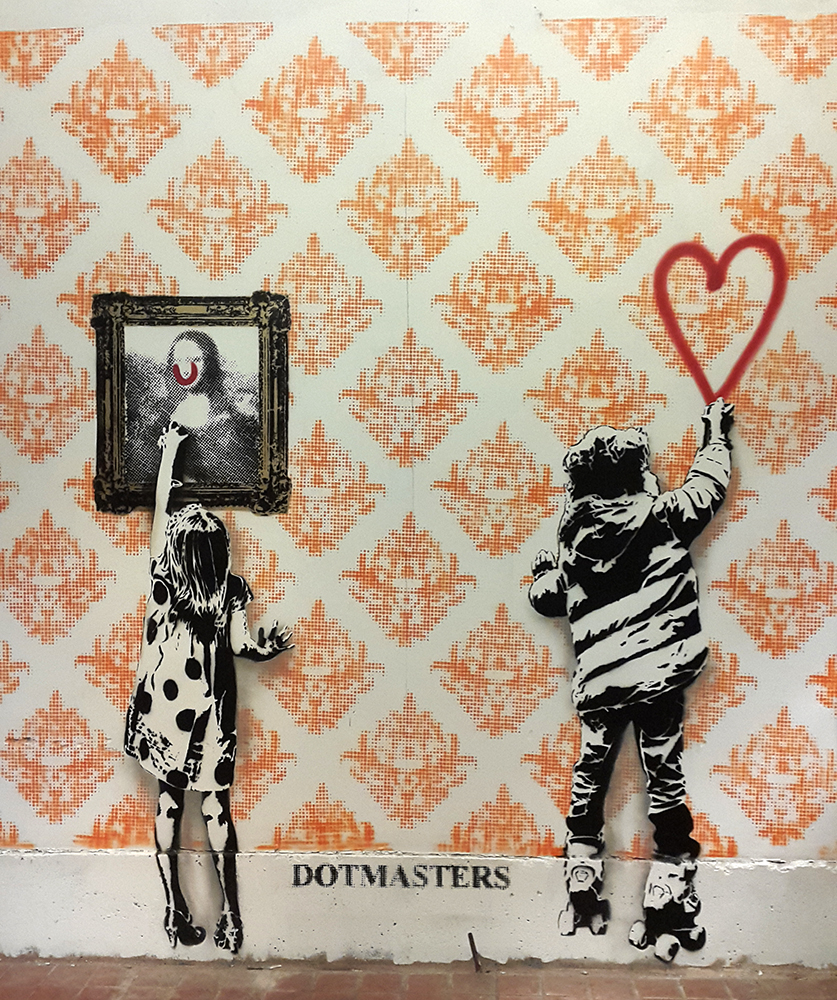 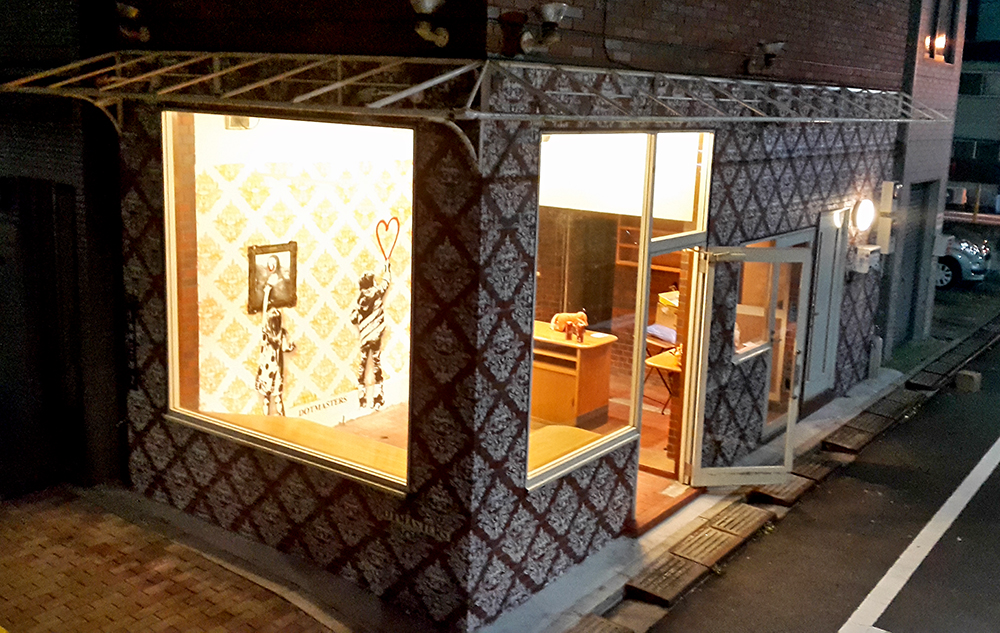 quick skateboard during the night.

It was almost a year since i was in Japan, recently a friend i met in Osaka, the amazing Ken has made a beautifully filmed short film for Mocatv about a few of the street artists that are working out of Tokyo and i thought i’d share it with you. If you ever want to paint in Japan then Ken’s your man!

A last final dash to a super nice gallery to paint on their walls before i left Tokyo and popped some eyes up for Filthy Luker.

What can I say? Absolutely bowled over with Osaka! Rode into town on the shingasen super express necking beers with Gaz Mayall who was playing at a club called Stereo. As soon as we arrived were met at the station by the incredible Masa (Japanese on the outside but a true Jamaican to the core). An afternoon guided tour of the underbelly of downtown osaka by Gaz, Elenor and Masa of course accompanied with copious amounts of sake and eating anything from sparrows to poisonous fish, thanks guys you set the mood for the rest of my stay!
Eine had hooked me up with a local contact for finding spots to paint, enter KEN!!! Its hard to explain just how amazing this guy is. Japan is not the easiest place to get a can out, its a straight to jail gig if your caught and at best works are cleaned the next day by the owner, local knowledge is essential and you don’t get any better than Ken and his good friend Masagon ( the ninja assist). With Ken’s brother Takuya as driver we set off on our mission, 4 spots with almost 5 hours driving just to get to them all, in just one day. Of course with Ken as tour manager, masagon as the ninja assist (even had a torch for the last after dark hit) and Takuya at the wheel it was in the bag.

Met some amazing people along the way, ate amazing food and got up across the city. Thankfully the last spot was Stretch a really cool bar where we watched japan trounce the Egyptians (I know how lucky can you get?) Couldn’t of done it with out the OK crew,. Cheers guys! Osaka I love you!

New bags for Japan show, cutting of the Chanel bag from the show and the test sprays of 3 more up market trash bags. Show opens on the 2nd of August at :

So first couple of days on site at Fuji Rock Festival and the site is taking shape. up in the mountains, its hot as hell, but we ain’t complaining. The hospitality is amazing, incredible sushi at squishy’s (i presume its a nick name), and hot geo thermal baths after every  days work and i though i was at a festival, feels like a holiday camp! The sideshows are slowly taking shape and the collection of sideshows and attractions are going to work really well together. We even have a group of indian fakirs coming from india to eat light bulbs and generally amaze us with their feats of strength.

Tea time for the crew….none of that green stuff for our crew, someone brought a industrial box of yorkshire tea with them.

So been beavering away, making stuff for Fuji Rock festival and getting the show together for Tokyo on the 2nd of August. The shippers have just taken the canvases, the spray paints ordered and last minute prizes for the high strikers are being made. I wouldn’t of guessed that i would have traveled to japan for the first time with a fire bell and a large rubber mallet in my bags but that’s the life of a traveling showman for you. The above shot is the last frame in of a time lapse that Calum and Saft films helped make to promote the Show, should be posted online soon (hi res version here). Well thats almost it, got the last mad run around picking up the odds and sods for both the High Strikers and the show and then its on the plane, the next post will be from Japan, but here’s a sneak peek at some of the new work for the show in japan.

Tools of the trade with the carrier of choice….lol

Below is the new middle sized high striker, ‘Knuckle Sandwich’
the empty scrolls will have the usual rating of strengths from loser to hero. Standing at 4.9m its the little sister of last years 7.3m ‘Old Boney’ . Together with ‘Dem Dancing Bones’ all three will form ‘The Bone Yard’ the ultimate test of strength. check out ‘Old Boney’ or here