I had a great time at easter with Widewalls, unfortunately those tricky guys at Saft films managed to convince me to front the bloody thing. I’ve worked with Saft many times before and soon the camera kings Zoomintrude and Nano shakes and myself fell into our old Rinky Dink Productions habits. The Final 6 minutes 66 second version should be released some time over the coming weeks. 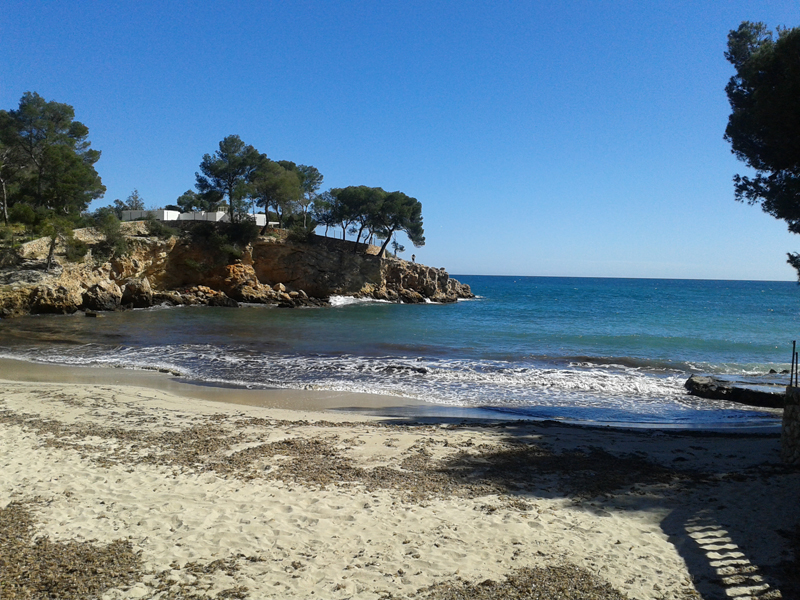 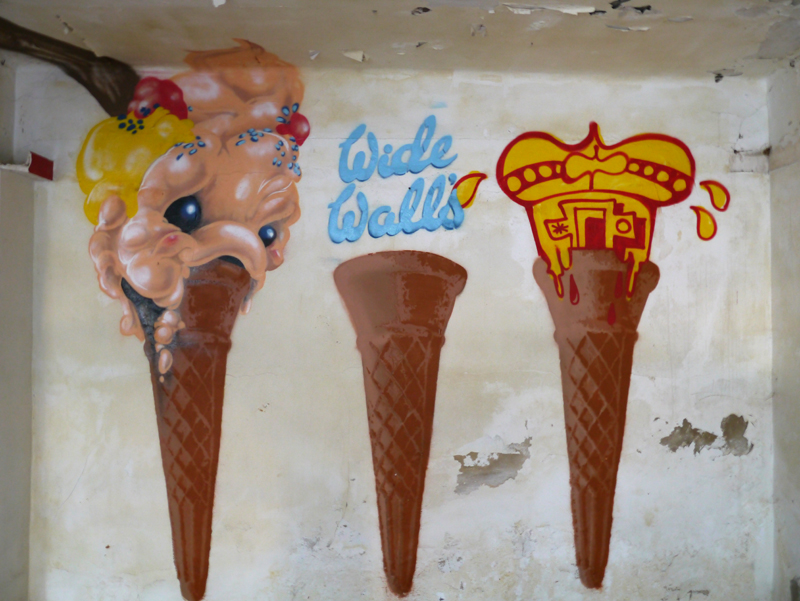 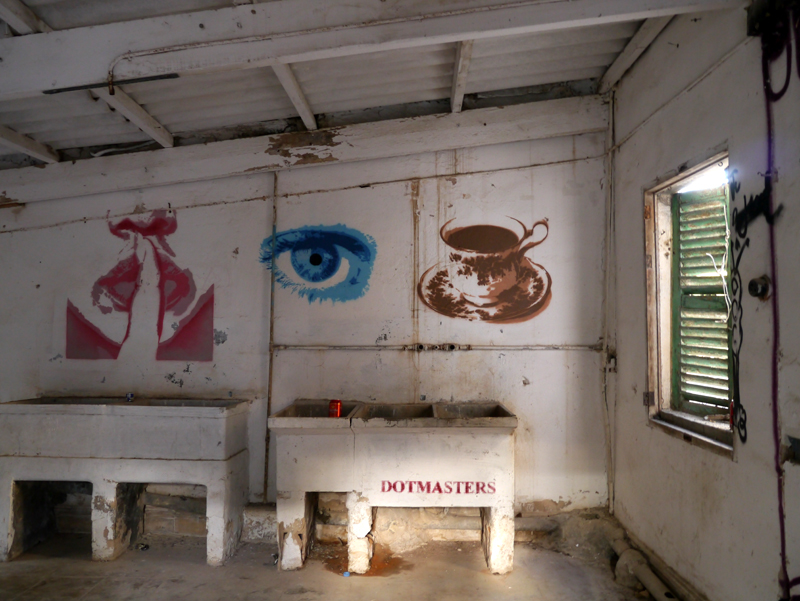 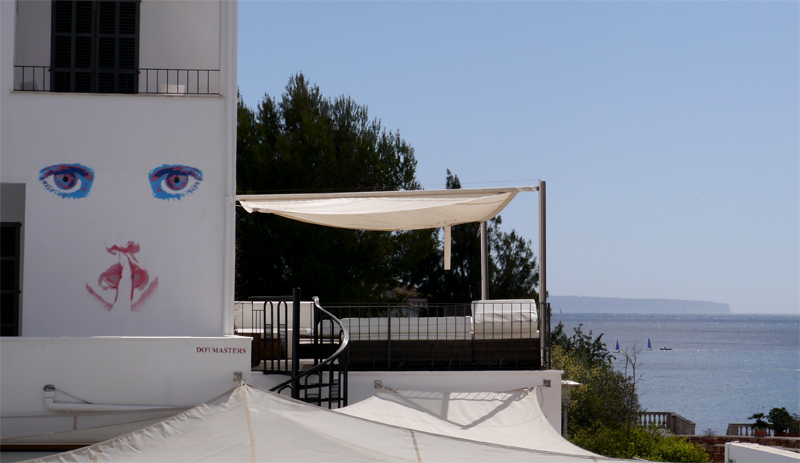 Been waiting for this to come out since last summer’s Nuart. One of my favourite pieces from last year’s festival. What didn’t make the cut was the frantic 2 hours were Hera was caught at the top of a very broken down cherry picker,  while an international crew (an Irish man, a English man, a Canadian and an East German….i know it sounds like the start of a playground joke)  tried to follow the Norweigian instructions to rescue her. Of course filmed by the amazing Saft films.

So it was with full fear we went to bergen to paint a wall with Eine and Steph. Not because they are scary but because we were attempting to paint a bloody big wall in the wettest part of the west coast. Famous for the rain, the town had experienced almost 2 months relentless rain pior to our trip. Ben arrived and the clouds parted….lucky basturd! I was straight (?) from Glastonbury and Ben and steph from Roskida, battle weary and soaked the sun made a decent change. Ben smashed the wall in 3 days. Contraversial calculate cash. It’s been a hard week, 16 hour days in the wind and the rain, and all too seldom the sun. After 3 days helping Ben Eine in Bergen (traditionally the wettest city on the west coast) in the blazing sunshine, i was hopeful that Stavanger would deliver the same. WRONG! The building above is the Lervig brewery, yes i got given the keys of a brewery and painted a bloody wall. Talk about couldn’t organise a piss up in a… Mike, the master brewer even offered me use of the company fridge! Hard to get enthusiastic for getting drunk in the rain 8m in the air in a cherry picker…..DAM.  Dodging raindrops the size of 50mm shells meant working through the night, in the vain hope that the forecasts were right. WRONG! But its nearly there and i”ve only a day more tweaking and introducing some stencil elements. The still above is from Martin Hawks, (Saft films) during the week he road tested some new camera equipment out and produced some stunning time lapse (with a difference!!) . He must of shot 1000’s of frames and each nights brought its own weather logistics, cameras don’t seem to like the rain much either. But wait till you see it…..beautifully filmed. Thanks to Carl for the shots below…again stunning, and of course the Nuart crew, and Reed productions for setting the whole thing up. May is a big month in my house, after attack of the killer noni in the garden, work starts on replacing the jasmine in the back garden for joys 6th birthday. Faced with a large cinder block wall Joy and i decided to decorate it.

Joy painted most of it with the bits out of reach being painted by myself. 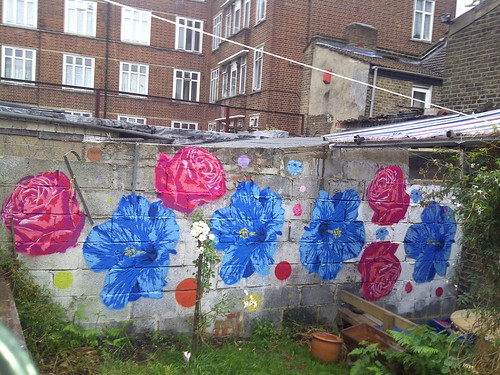 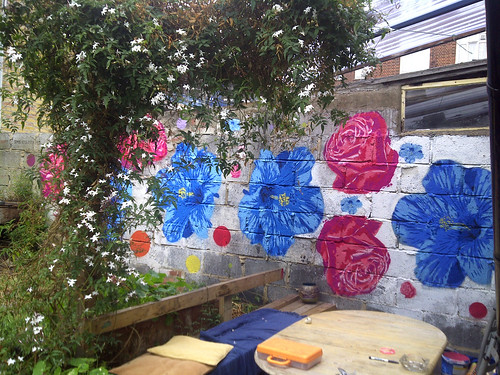 Well started at last painting Cordy House its a bloody big wall and we have a monster scissor lift and a hell of alot of paint so looks like its happening. Should be finished by the weekend ish. Heres a picture of the team a painting, thanks to Addict for the dope clothes! I am sure they will keep us warm during the week. The team are Best ever, Dead leg, Dotmasters.

Landed in Munchen this afternoon, went to the ghostyard paint shop where they raided their own personal stash for some shades they didn’t have on the shelves and went to visit where i am painting tomorrow.

Its a cool cycle tunnel by the river isar the tunnel has been curated by loomit and its looking great, Its a stroke of luck to get into this cool spot! Most of the artists have painted their walls with only loomit and myself left to paint. Theirs snow on the ground and its bloody cold, but tomorrow looks set to be a day of foot stamping and hand clapping spraying….cant wait. More photos to follow.

While in Stavanger a friend from last year asked me to brighten up a wall or two at their cafe in neighboring village of Sola . Run by two sisters Camilla and Amy the “thirsty  sisters” is a coffee shop with a difference, if your landing at the airport at Stavanger its worth dropping in for the best coffee in the region. Preparing to paint down under the Westway at the Portobello Film Festivals outdoor cinema (just off Portobello Road). Part of this years festival program is ARTIST’S EYE where artists choose their favorite films, paint something in the cinema and introduce the movie of their choice before the screening.
On friday the 3rd of sept Blek Le Rat introduces Performance  and I present Holy Mountain, we will be painting there over the coming days. On the 4th Inkie presents and paints from Mr Hulot’s Holiday. The 5th see’s Babooshka painting and introducing Barbarella. Solo one will be painting down there and other artists such as Patrick Hughes, Andrew Logan and  Michael Horovitz will be introducing their fave films. A full program can be downloaded here
introduce their favourite films.